The official advertising embargo release of the Lunar Goat/Sheep coins is 13th of August, at this point Bullion Money will release the images of the new coins and pre-sell the year of the goat coins. Delivery of the coins to Bullion Money will happen after 1st of September 2014. The coins will be available to our clients and public proceeding this date.

Along with the Lunar bullion coins the following bullion series coins embargo will also finish 13th August and be released as per dates advised;

The 1 oz Silver Goat 2015 and the 1 oz Gold Goat coins have a limited mintage of 300,000 and 30,000 respectively. Typically the Year of the Goat isnt considered an exciting animal unlike the recent Lunar Year animals like the Dragon, Horse and Tiger. However if the past years are anything to go by, these coins will sell out very quickly from the Perth Mint. The only other coins in the Lunar Year series which have a limited mintage are the 10 kg Silver and gold coins. These coins are restricted to approx 100 by the Perth Mint. It is also worth noting the Year of the Goat had very strong sales in the Lunar Series 1 released by Perth Mint. 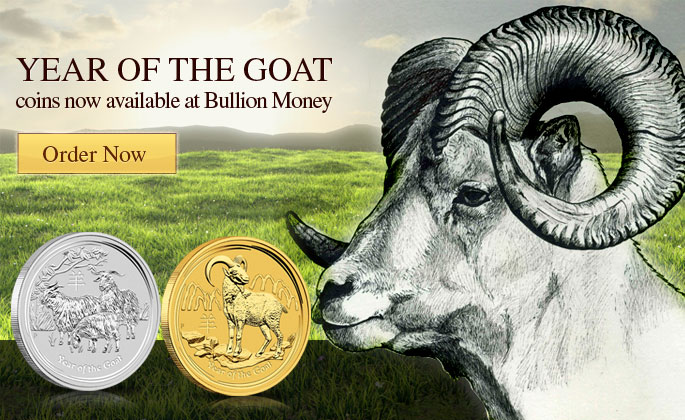 Silver 2015 Year of Goat Coins - 3 goats (Family) stylised in a rural scene with tree branches overhanging the top left part of the coin along with the chinese character for 'goat' incsribed above the goats.

Gold 2014 Year of the Goat Coins - A mature goat depicted in front of stylised mountains perched on rocks. The goat has large curved horns. The chinese inscription of 'goat' appears on the left portion of the coin

2015 Gold Kangaroo coins - 1 bouncing kangaroo which appears to be crossing the Australian outback highlighted with shrubs/grass and distant trees in the background. A large full moon is depicted on top right hand side of the coin. The large 1 KG gold kangaroo design will remain the same as per previous years. (Red Kangararo centered around a stylised border)

Silver 2015 Kookaburra coins - This is the special 25th Anniversary edition. (25 years since the release of the silver kookaburra coins). The Perth Mint have decided to keep the design of this coin as per the first Kookaburra coin released in 1990. A single kookaburra sitting on a tree stump surrounded by eucalyptus leaves.